Show me the child at five… 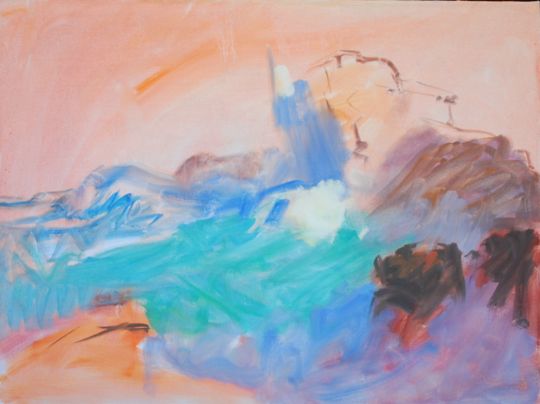 Well, it’s nice to get this stage up and running….there’s a circular movement and a pyramidal structure to this painting that is more evident now. By the way, I’m working on a Belgian linen with an oil priming that I did myself, something I returned to doing a couple years ago.  I enjoy creating and working on these surfaces very much.

I also feel I’m finding a good sense of  how I want this painting to come to life.

For this stage,  I establish the overall placement and tones, and the location of my lightest light and darkest dark.  Those represent the extreme ends of the value range, and every other value is going to  fall in between those two poles. And I bring that  light down in value from pure white;  it’s not a pure white, but colored and toned down a step or two.  That’s important, because I don’t want a screeching falsetto at the top of the value range, but something deeper and richer that merely appears white-like.  It determines the tonal key of the painting.

I also am working so that there is the sense of looking up slightly, maybe almost subconsciously.  I’m eliminating the bit of  horizon that was showing to the left in the sketches, which destabilizes the overall effect, making things feel a little more energetic.

I use my largest hog-bristle brushes, ones  that you can really  cover some ground with. I always push myself to work with the biggest brushes I can for the area I’m working on. I grip the brush lightly in my palm at the end of  the handle, like an orchestra conductor would hold a baton, making use of the full length of the brush, and working somewhat at at arms length, so I’m back away were I can see big pieces. The paint is thinned with Gamsol, just enough to give it a touch of a glide on the surface, and I try to complete the lay -in suggestively and energetically.

(If you ever have the opportunity, study the unfinished paintings that museums occasionally have out.  They are gold.  A favorite example, at the Met in New York, is the large and incomplete Greuze mythological painting “Aegina Visited by Jupiter”, which in many areas reveals  the initial lay-in stage. It’s a surprising opportunity to see how a superbly trained painter developed his work. Many other museums have studies and other partially finished works that for a painter are treasures.)

I find that the more I can keep the painting fresh and moving forward in the early  stages, ” sustaining it’s adolescence” for lack of a better term, the richer the painting and the less finicky the final work becomes.  I’ll want more of the sort of energy I see now, in this first stage,  to remain through to the end.  That requires awareness.  Awareness is not painting thoughtlessly, when you are tired, and  means putting the brush down and getting back from the work.

I’m stepping away from the painting often, back eight feet or so. I also turn the piece upside-down while working, so that I can keep the abstract patterns in mind,  separated from the content. A mirror serves the same purpose, and it’s really important for me to take the time to use those tools often.

Didn’t  the Jesuits have a saying, “Show us the child at five, and we’ll show you the man at 25”, or something to that effect?  That sums up how I think of this stage of the painting.  Anything that I won’t care for later  in this painting is probably already rearing it’s ugly head now, and so I’m keeping alert.  One thing  I hadn’t noticed  until I worked on the canvas upside down was how critical the  element in the lower left hand corner really was to the balance of the painting.  I need to pay more attention to it, but in a simple way because I definitely don’t want the eye to get hung up there. 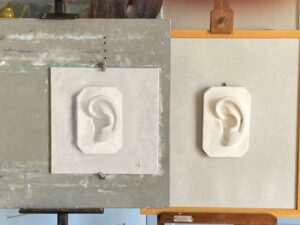 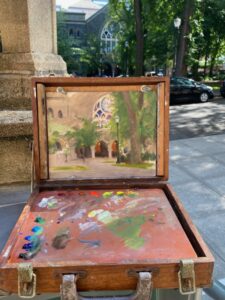 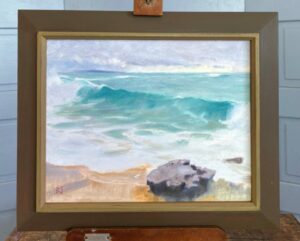 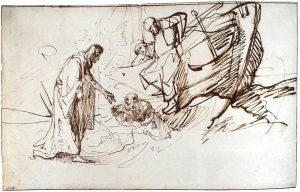 Thoughts on Rembrandt’s Drawing “Christ Walking on the Water”

This site uses Akismet to reduce spam. Learn how your comment data is processed.